Introducing the brilliant Cheryl and Abigail Byron, real-life mother and daughter performing their own story in don’t forget the birds, written by Catrina McHugh MBE and directed by Laura Lindow.

Cheryl Byron has been involved in the performing arts her entire life, since winning the Miss Pears Soap Award at the age of five. Her father was one of the founders of Notting Hill Carnival, so Cheryl grew up in a family of performers and was offered a prestigious ballet scholarship in London at the age of 12. Despite declining the offer so she could remain in the North East with her family, she excelled as a professional ballet and tap dancer, singer and model, performing on television and live across the UK. Cheryl first met Open Clasp during her sentence inside HMP Low Newton and was one of the original theatre-makers who collaborated to create award-winning prison drama Key Change. Since her release, she and her daughter Abigail have been working with Open Clasp to develop don’t forget the birds. Cheryl is thrilled to be touring with the show after two years of development and is looking forward to showing audiences what actually happens when you are released from prison.

Abigail Byron first took to the stage as the title role in Joseph and the Technicolor Dreamcoat in Primary School. Studying at the Tyne Theatre School from the age of seven before moving to the Newbiggin School of Arts, Abigail thrived in both music and sports. She received glowing reviews as Motormouth Maybelle in Hairspray (Tyne Theatre) and has also performed in Oliver! (Tyne Theatre). Abigail began working with Open Clasp when her mother, Cheryl Byron was released from prison and is excited to be performing alongside her across the UK in don’t forget the birds. She is keen to share her story in the hope that she can support young people with similar experiences of maternal incarceration.

“Rehearsals have started and we are reading the script, looking at the words and laughing loads.  We met the mother Cheryl in HMP Low Newton, she was one of the original theatre makers and performer with Key Change…Every time we meet Cheryl she reminds me of the ‘100 year old man who climbed out of a window’ (the book), she tells a tale and big worlds open before our eyes, her life full of intrigue and surprise, new stories keep spilling out and in to the script.  Abigail’s voice is velvet in tone and song, all eyes are drawn with every word spoken. The script is powerful, heart-breaking and heart lifting.” Catrina McHugh MBE, writer and Artistic Director. Click here to read Catrina’s blog on don’t forget the birds. 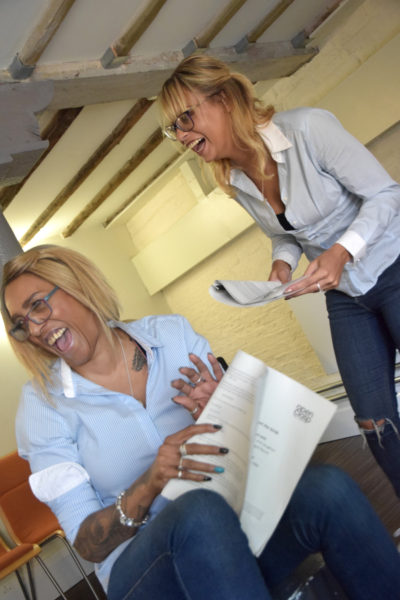